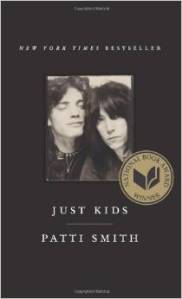 Patti Smith is a poet, sure enough. It starts with the title, Just Kids, which refers to a chance encounter these two had on the streets of New York City: dressed in their ragged-fabulous 1960’s artist finery, they were spotted by an older couple, and the wife said “Oh, take their picture, I think they’re artists” But her husband refused saying, “Oh, go on. They’re just kids.”

And they were: barely twenty years old when she made her way to New York, escaping her humdrum New Jersey upbringing, Patti Smith encountered an even-younger Robert Mapplethorpe, and the two began a relationship that defied convention or definition, that survived separation and heartbreak and the trials of everyday life, that lasted decades and, in the end, made art: because these two helped each other to become what they became: rock stars, one in music, and one in photography. But when they met, they were just — Patti and Robert. Both determined to be artists, to create wonders, but neither knowing how. Mapplethorpe hadn’t even found photography yet. Smith, though she wrote poetry, was as much a visual artist as a wordsmith, drawing and painting and assembling collages alongside Mapplethorpe, never dreaming she would be a musician and stage performer.

The world these kids fly into, like Icarus, like Alice, is a magical place. New York in 1967 is not the city we might think of today: the same in some ways — hard and cold, difficult to make one’s way through and survive — but the weird guy that Patti Smith runs into on the street is — Robert Mapplethorpe. It’s a place where you could trade art for rent. Where the man behind her in line at the Automat, who makes up the dime she lacks for her chicken pot pie, is Alan Ginsburg. She writes a song for Janis Joplin, runs into Jimi Hendrix on a stoop; she and Robert are surrounded, it seems, by artists and those who love art. We can see pieces of it in the photographs that appear in the book, and more of it in the words: it is a fascinating place to read about, as these are fascinating people. Moreover, both the scene described, and the people in it, are deeply inspiring to an artist like myself.

I confess I did not know many of the people Smith met, collaborated with, or was inspired by; I can’t even say that I knew well who these two were, though I remember Mapplethorpe from the controversy in the 80’s, and I had heard Patti Smith’s name and music before. I think the book would be even more intriguing for someone more steeped in the 60’s and 70’s culture, who would know everyone, and could have the same vicarious thrill I had when she mentioned Edward Gorey — “in his large tennis shoes” — coming into the bookstore where she worked, so many more times with more names than I knew. Someone who would recognize the genesis of her songs in the experiences she describes and the snippets of poems she includes. But even if, like me, you aren’t versed in Andy Warhol’s circle, the book is still a wonderful piece of writing, an entirely open and vulnerable and honest slice of a fascinating life, with or without fame and fortune. There is love here, and beauty, and art, in a way that I have seldom heard, and that I believe has only rarely occurred. It is worth knowing.
The joy in this book is, first, in reading the words

One thought on “Book Review: “Just Kids” by Patti Smith”