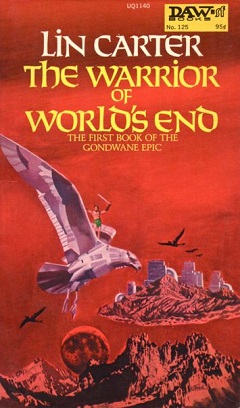 I’ve been reading some of the older pulp fantasy/sci-fi books, and this was one of those — a Daw paperback, the pages yellowed on the edges, the cover price only 95 cents. Lin Carter is one of those names I always see on rows of thin, dog-eared paperbacks in used bookstores, but not one I ever needed to read.

But that was only because I didn’t know what I was missing. And if you’re a fantasy fan, especially a fan of cheesy Robert-E.-Howard’s-Conan style fantasy, you must read Lin Carter.

This book was brilliant. I can’t wait to get back to the used store and buy the second book in the Gondwane Epic, and then keep going until I get to the end — and I hope that’s a long way off. The basic idea is this: 700 million years have passed since our current era, and the Earth’s continents have drifted into each other to form a single mega-continent — the title of the epic and name of the continent coming from the primordial Gondwanaland, the mega-continent that was the southern half of Pangaea, when all of the Earth’s land surface was in one land mass that became two and then became many — and things are, of course, very different. It’s a fantasy world-building technique that I’ve always enjoyed; my other favorite use of it was in the Wheel of Time. In this case, you have a traditional swords-and-sorcery society, with the opening narrative from the point of view of a trader riding a donkey from one great city to another, passing through the Crystal Mountains by a great desert, with his wife, who is actually a sentient plant-being. On the way through the mountains, an earthquake shakes the land, and soon they discover a Great Epic Hero wandering through the aftermath, lacking even the ability to speak intelligibly — but his thews are mighty, and his hair is glittering silver. This is Ganelon Silvermane, the hero who will save the world from doom: the star of the epic. The trader and his wife take Ganelon in and raise him like a seven-foot-tall bodybuilder/baby; they teach him to be honorable and courageous and everything a hero should be, and then off he goes a-heroin’.

It’s great. Carter uses all kinds of unnecessarily fancy words and complex sentences, but without making the book as hard to read as, say, H.P. Lovecraft’s work. There is a simplicity and childish glee in it that made me smile the whole time. It reminded me very much of Conan, or of Edgar Rice Burroughs’s John Carter of Mars series, but with a heavier tilt towards fantasy and away from SF — since there is a Red Enchantress, and an Illusionist, and Death Dwarves, and a magic flying bird-vehicle made of brass and granted intelligence and a personality, and the ability to speak. Ganelon meets a lithe Amazonian-type warrior woman, whom he saves from evil priests, and who I’m sure will be a love interest at some point, but our hero is too innocent of the ways of love as of yet; so far all he does is fight great battles and break large things with mighty swings of his flashing sword, all that kind of stuff.

It was a hoot. Highly recommended for those who like this sort of thing.

One thought on “The Warrior of World’s End”