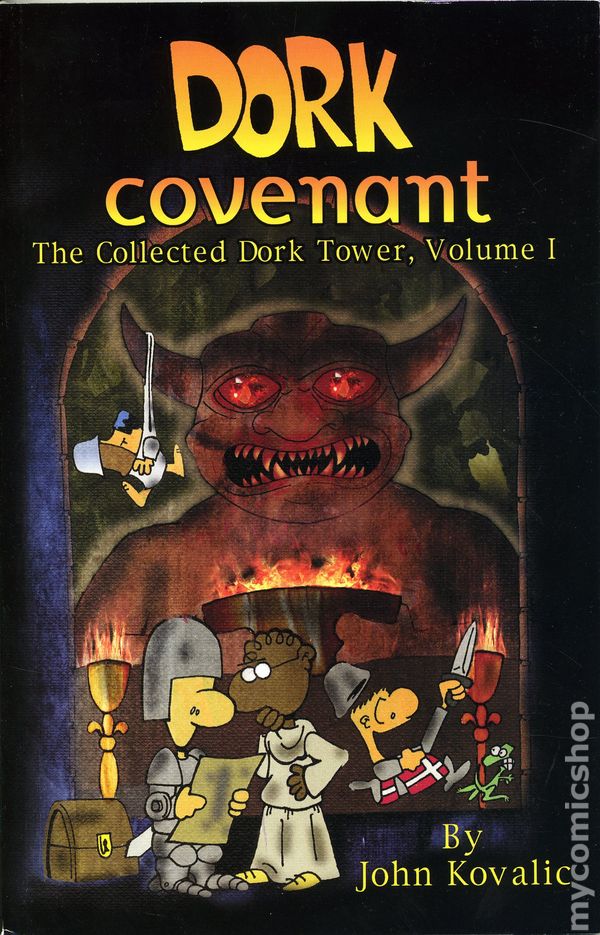 I bought this comic collection used from Powell’s books, well over a year ago; I was saving it for the right moment to read – and after getting bogged down in a lengthy non-fiction book, and while reading a disturbing Stephen King book, this was the right time to read this.

I am this comic.

I have lived these arguments, these experiences. I had the D&D rulebook that inspired the cover art for this. I have both been and known the min-max gamers like Igor, who find ways to twist the system and overpower their characters – I remember an old Champions character (Anyone remember Champions? Superhero RPG from the 80’s? I bet Carson the Muskrat would!) who took the “disadvantage” of being incorporeal, which allowed him to purchase massive amounts of power, and also, coincidentally (not coincidentally), made him impossible to defeat physically – and I have run games, as Matt does, in which my players ruin my carefully crafted storyline within moments, generally through killing innocent and helpful characters just for the hell of it. I still get into arguments with my dork friends about Star Wars Episodes 1-3.

And, God help me, I have LARPed. I was LARPing the very same vampire game that Dork Tower satirizes when I met my wife, who resembles Dork Tower‘s Perky Goth, at least a little. I am thankful that meeting my wife pulled me a reasonable way out of the gamer dork world, because I don’t doubt that without her, I would have finished my transformation into these characters, and continued living this life, all the way through the conventions that they go to but I never did, and the E-Bay purchasing frenzy, and the burning hatred of the rise of Pokemon. (I can completely relate to the strip set in the game shop that shows grown gamers surrounded by just the very tops of children’s heads, the rest hidden by the frame, as the children mill around saying “Pokemon? Pokemon? Pokemon?” like some kind of zombie lemming horde. I saw this when I tried to start a gaming club at school and was inundated with freshmen playing Pokemon, while I and a few seniors tried to run a proper D&D game. Damn that game.) I can picture myself going through the pathetic attempts to date, always ruined by the fact that the woman would inevitably ask me, “So, what do you do for fun?” And I would have to say, “I’m a gamer.” And then watch as she leaves.

John Kovalic wrote that strip. I read it, and I laughed. I laughed a lot reading this compendium, and knowing now that there is a whole world of this comic for me to read makes me extremely happy and grateful. As happy and grateful as I am that I found my wife, and that she was able to ignore the LARPing and the violent rage at my Magic the Gathering games, and stay with me, and save me.

This whole strip is highly recommended for anyone who knows or lives La Vida Dorka, as Kovalic calls it. And this seems like the best place to start, with the first compendium. Available for purchase on the website.