An introduction to his familyyyyyy!

My wife and I speak for our pets.

I know this isn’t unique; maybe not even unusual. And though it may seem like it is to other people, especially the petless and those on the lower end of the imagination spectrum, it isn’t even strange or nonsensical: our pets, like any sentient thing, have personalities, and the clearest way for humans to depict that is to put it into words. We also do pantomime and funny voices for all of the pets, but that isn’t something I’m prepared to re-create on this blog.

So just the words will have to do.

What I have noticed over the years of speaking for my pets is this: my pets are smart. Very smart. Also kind of insane, but still — smart. The things they have to say, when we humans try to step outside ourselves and solidify their apparent perspective, are often true and even insightful things. This may be exactly because the attempt to speak in another persona allows us to step outside our own egos, and gain a new and perhaps clearer perspective; it may be because animals don’t care about the same bullshit that humans care about, and when you are speaking for an animal, it is impossible to speak like a human. It may be because I actually like animals better than humans, and so when I am speaking for them I tend, consciously or not, to make them sound like better people than human people generally are.

Though that last one isn’t entirely true. Because I speak for Dunkie, too, and he’s crazy. But also very sweet. And he don’t take no shit off of nobody, which is something that is not true for me, and which I admire and envy.

Regardless, whether it is escaping my own ego, or escaping a human’s perspective and a human’s baggage, or even if it is just that I want to make my pets seem like good people, it seems to me that their advice is worth listening to. So I’m going to be giving them a regular sort of column on this blog, and asking them what they have to say about the world we all share.

First, let me have them introduce themselves.

This is Duncan. He insists on going first, because he’s the oldest, and because he believes he is the most important.

YOU’RE GODDAMN RIGHT I’M THE MOST IMPORTANT! Yeah, that’s right — because it’s all about Dunkie. Oh! Right, yeah, introduce myself. Okay, LISTEN UP! I’m Duncan. I am named for a king. KING DUNKIE! I bring beauty into this house.

My feathers are pure white, and very clean and neat, because I spend the majority of my wakey-time grooming myself. I have a beautiful gold crest and awesome orange cheeks, and I whistle and sing and make kissy noises when I feel like it.

When I don’t feel like it, THAT’S WHEN I START SCREAMING!

I can be very loud. BUT ONLY WHEN THEY DON’T DO WHAT I WANT! I can’t help it. I’m very small and I’m stuck in a cage. I don’t have a lot of weapons. I can bite, and I threaten that a lot. Doesn’t seem to work, though. BUT THE SCREAMING DOES! Yeah, it works good. It gets a real response, you better believe it. They always think they can ignore me, BUT NOBODY IGNORES DUNKIE! Even though I’m a tiny little pretty bird, I AM A FOUNT OF RAGE! It never lasts very long, though. But the screaming can go on and on and on and on because nobody is as stubborn as a bird. But then they just cover me up. That makes me stop screaming.

But really, all they’re doing is making me swallow my rage. The screams don’t stop, they just go inside.

It’ll come back later. Rage always does. You better believe it, pal. Just as soon as you do something I don’t like. Yeah.

Oh yeah — and I can be very sweet, sometimes, too. I picked Mama out special when she came into the pet shop where I was living when I was new. Birds are usually standoffish to strangers, but I walked right up to her and put my foot out, reaching for her shoulder so I could stand on her. I still like to cuddle and have her give me skritchies. And then I close my eyes and make the tiniest little peeping noise.

It’s almost enough to make you forget about the rage. 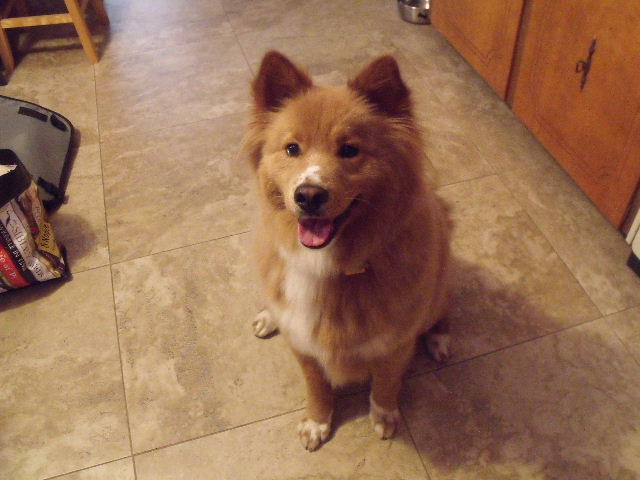 This is Samwise. Samwise, also known as Sammy, also known as the Fox in Socks (the Spitz in Spats), is the middle child (we think — both his age and the tortoise’s age are somewhat in doubt.) and is the sweet one.

HEYYO!* I am Samwise! I am a goodwill ambassador, that’s what my persons say. These are my persons, my mom and my pop.

I call them that because they took me in when I was in the joint. See, I used to have different persons, but they abandoneded me, and then I had to live on the street for a while. I came pretty close to starving to death, and it made me very scared and anxious. Then I got picked up and put in the shelter — but the dogs call it the joint, because though it sort of is shelter because you get a roof and food and water and stuff, you’re still locked in a cage, and you’re alone and scared pretty much all the time, which is why all the dogs in the joint bark a lot and act really mad. Because they’re scared and they don’t know why they don’t have a home any more, because we all used to have homes and persons, and then all of a sudden we don’t, and we’re in the joint.

The joint changes a dog.

But it didn’t change me!** Because I am super sweet, and very friendly and curious. (Though I still get scared sometimes.) I like everybody. I greet everyone and let them all pet me — I am very soft and fluffy. I never ever growl or bark, and I am not afraid of strangers — I like to stand up and pat them on the tum, because I like tum rubs and I think everyone should have tum rubs. My mom and pop think it’s amazing that I’m still so friendly and sweet, because I have plenty of reasons not to be, from my early life before I came to live here. But they don’t understand: that was all in the past. Now I have a nice home, and lots of food and tasty treats, and two persons that love me and will always take care of me, even though I bit my mom on the first day she brought me home because I got anxious and freaked out like I do sometimes, but they didn’t bring me back to the joint like the persons who took me home before them who only kept me for a week and then brought me back, or the ones before them who did the same thing (Pop says it’s because people suck, and because I have this thing they call tick fever from when I was on the street and it means I need to go to the vet and get medicine and tests and stuff and it costs money and the persons who took me home didn’t want to pay for me, but I don’t know what money is and I don’t even like the vet because they poke me with owie things but then they give me treats so it isn’t too bad but still if I could I would skip the whole thing and I’d really rather just have persons even if they don’t take me to the vet because all I really want is a home. And I have one now. So the persons who didn’t keep me before, that was just because they weren’t the right persons. I had to wait for just the right persons. And I found them!). So now I have a home, where I get to sleep in the bed, and I get two walks a day, and I get treats all the time, and they always pet me when I want them to and rub my tum and everything.

So why shouldn’t I be happy? See how nice persons are? Just look at my mom and pop! I think they’re awesome!

Okay I have to go now! Now you get to say heyyo to my outside brother! He doesn’t live in the house because he poops everywhere. I don’t know what the problem is. His poop seems pretty easy to clean up. But then I guess I’m not the one who cleans it. Anyway, he lives outside and he seems to like it. Okay bye!

(*Sammy’s greeting is pronounced like “Hello” with a Spanish “ll,” pronounced as a “y,” like “La Jolla.” It does not sound like Ed McMahon’s response to Johnny Carson jokes.)

(**Actually, it changed him quite a bit. When we brought him home, he weighed 25 pounds; he is now almost twice that, and has three times as much fur. Before and after:) 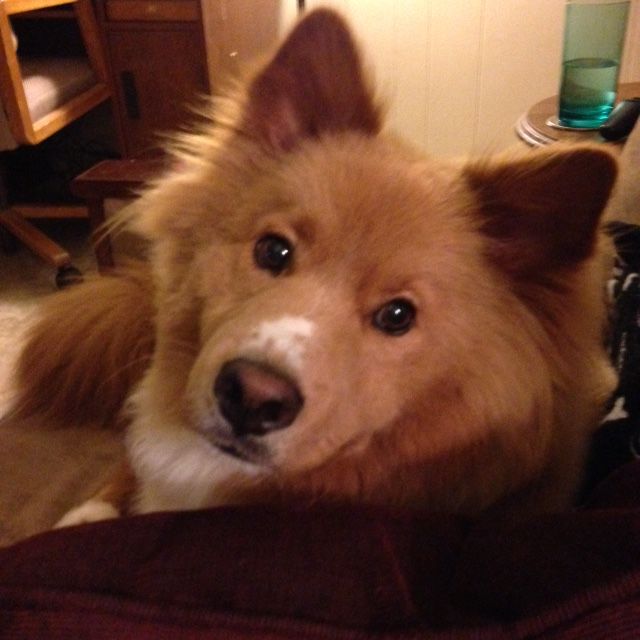 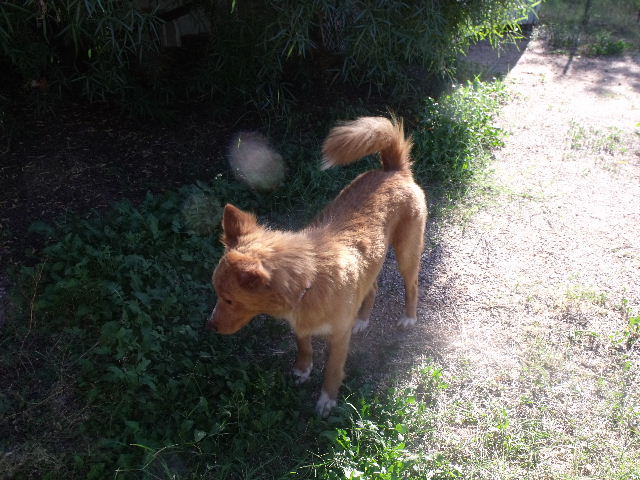 Neo is an African spurred tortoise. We named him Neo because he was a gift from our former landlady, and when I was looking up African names, I found that “Neo” is a gender-neutral name that means “gift” in Tswana. We pronounce it like the name of the Keanu Reeves character from the Matrix, though I am sure that the actual word is pronounced differently; but we love the Matrix movies, and I sort of like the idea that the tortoise is actually the messiah. The actual word for the tort is “calm.”

This was the new sod we got for him, and the fence that didn’t keep him out. (Photobomb by Sammy’s butt.)

Food is good. So is sleep. I like to hide so no one bothers me. Especially that furry guy (“HEYYO!”). He sniffs me a lot. He moves too much. And too fast. You have to take your time, because otherwise you might miss things. Like food. I eat pretty much anything. I can’t see very well, so I usually try to eat everything I can find. Then I sleep.

I have a shell because I don’t want to be bothered, but usually I walk around a lot and look for food. I can walk surprisingly fast, especially when one of the tall people come out and come near me, because they usually have food and I walk straight to them as quick as I can. Which is pretty quick. Not that quick.

Not as quick as the sniffer. I have an extra house, like a shell for my shell.

I sleep in there because it has a warm rock* that I like to sleep on. Warm is good. Sleep is good. I walk around every day and graze, and eat my plate of salad, and then I go and lie in the sun or lie on my warm rock and sleep.

One thought on “On the Fifth Day of Blogging, Just Dusty Blogged for Me…”