(Had a slowdown there when I had to get some work done for school, and had a family visit. But it’s still Spring Break! And I’m still reading!) 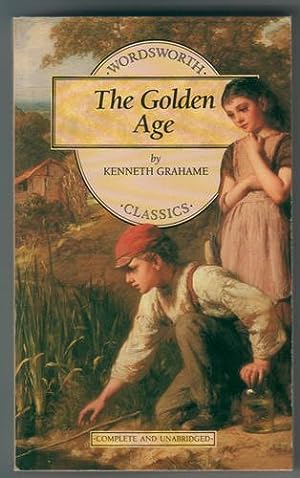 I think I have just read the most British book ever written.

It’s Victorian, of course. Written by the man who wrote The Wind in the Willows. It is about a family of children, three boys and two girls, who are orphaned; but that fact is, in proper British fashion, never really talked about: it is hinted at by saying that they know a long succession of aunts and uncles, none of whom they get along with too terribly well, and never talking about their mother and father. It describes their childhood in the most idyllic fashion imaginable: they scamper and run and play in the green meadows and fertile farms and darkened woods of the English countryside, never seen as anything other than glorious and, yes, golden; and the narrative is almost entirely tongue in cheek, but not in a terrible way: it’s more like a grownup playing along with children, taking their games seriously, believing what they believe, but always knowing and appreciating the innocence of those kids.

It’s nicely done, actually. Made me laugh several times. The kids have great imaginations, and they play games that sound like enormous fun, and made me want to go out and steal a rowboat and row it up a creek, pretending to be Jason and the Argonauts in search of the Golden Fleece. I like how they constantly try to dodge their lessons – provided, in very upper-class-British fashion, by a tutor and a governess; I like how they play King Arthur and fight over who gets to be Lancelot. There is a very sweet moment when they plan to throw a snarky celebration when their much-feared governess departs, but as the day grows closer, they realize they don’t really hate her, but will miss her when she is gone, and their snarky celebration turns into a genuine sadness over the leavetaking. There is a hilarious moment when they play a game at midnight, creeping through their house, and in the process scare off their new replacement tutor, who thinks they are ghosts and goblins. There are many realistic moments when they talk about their relationship with each other, which sibling is the tattle-tale, which one is the most manipulative, which one is the easiest to trick; and also when they talk about their relationships with adults, who often condescend or ignore, or – worst of all – think that everything they say is funny. So annoying, those would-be comedians.

It is a golden age: so golden it’s almost fantasy. Which is interesting, because this book is almost more fantastic, in the sense of being make-believe, than The Wind in the Willows, which has fantastic elements in a much more serious and realistic setting and plotline. This book is very much a depiction of childhood innocence, and it was a lot of fun to visit those halcyon days of yore.