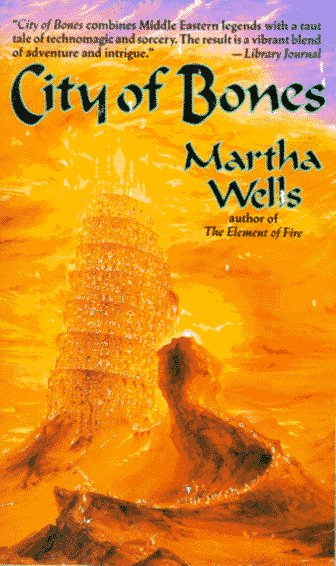 I don’t know why I’ve never heard of Martha Wells.

It’s clearly my problem; she’s written more than a dozen novels since the mid-90s, been nominated for Hugos and won a Nebula, along with several other awards. I mean, I’m not THAT deeply involved in the F/SF world; I don’t go to ComicCons, I don’t really belong to any fandom, I don’t dress up as any characters (Other than my generic pirate costume, which is the only costume I will ever wear for any appropriate occasion), I don’t obsess over Star Wars or Star Trek (And that might have been a way for me to learn about Ms. Wells, as she has written a Star Wars universe novel. But I haven’t read it.), I read things other than genre fiction. There’s a lot I don’t know.

This book surprised me. I got it entirely at random; I found it in a local thrift shop when I was looking for fantasy and sci-fi books I did not know to give to a former student. The former student ended up not wanting the books, so I kept them and have been reading them slowly, and happily, it was this book’s turn. And what do you know: this is a damn good book.

It’s sorta post-apocalyptic in the sense that there were Ancients who might have been us, who destroyed the world but left relics and mysteries behind. Those relics and mysteries are magical more than technological, so it might be an alternate world entirely; it’s left unknown. Reminded me of the Wheel of Time, which of course means I liked it. The society that has managed to survive the cataclysms of the past is essentially city-states on the edge of a giant wasteland that is the result of a supervolcano eruption caused by the Ancients in some way. The book takes place in one of those city-states, and the society that Wells creates, as well as the world she builds, are excellent: detailed and complex, as well as believable and realistic. It’s a sort of a caste city; built in eight tiers, each of which is separated from the others by gates and guards, and mainly by social rules and expectations, the people range from the desperate beggars of the Eighth (bottom) tier to the hereditary monarchs and powerful government officials of the First Tier. The book ranges all the way from top to bottom. It also goes out into the Waste, where the largest relics of the Ancients are: buildings called Remnants, it is unclear what their purpose is, and since they are surrounded by deadly terrain filled with venomous predators and roving bands of cannibal pirates, most people leave them alone.

But not the characters in this book, which was the other great strength here: these are good characters. The main three are two sort of Indiana Jones-type adventurers, dealers in ancient relics, experts in identifying and valuing the objects that have survived since the cataclysm (They are also badasses, though Wells doesn’t go overboard with that, which I liked.), and a young woman from the First Tier, the daughter of a wealthy family who is also a newly trained wizard/guard for the city, called a Warder. She hires the two relics dealers to help her solve a mystery involving three ancient relics, along with a book, written apparently by the ancients, which explains the use of the relics and gives both a tantalizing hint of power, and also a dire warning. Guess which one the power elite of the city pays attention to, and which they ignore.

The book follows the quest of these three to solve the Ancient mystery, while also delving into the daily lives, the trials and tribulations, of the two relics dealers, who live on the Sixth tier – high enough to avoid beggary, but low enough to have to deal with thieves and gangs and organized crime, which touches them because there is a black market for relics, and they have to deal with it. The characters are well-developed, and are both sympathetic and also not, in a proportion that makes them seem very much like genuine people: the main character, the relics dealer Khat, is often sullen and secretive and obnoxious; but of course he is, because he lives a hard life surrounded by people he can’t trust, and he is also a member of a racial minority (A non-human race, that is, because this is a fantasy novel) and so he deals with constant prejudice, as well. His partner, Sagai, is a husband with four children, and so has to take fewer risks and also be assured of making enough money to support his family. The noble Warder, Elen, is somewhat sheltered and therefore naive, but has also put her trust in the wrong people, and suffers for it.

Overall, the book was great. Good characters, good world, good plot. It goes from feeling more like a historical novel, maybe set in Egypt or Baghdad in Biblical times; to feeling like a full fantasy novel with magic users and relics and magical creatures, as well. It’s impressive, and I highly recommend it.