This one’s been a bit of a long time coming; I got this book  from the author herself at the Tucson Festival of Books, where Brick Cave Media had a booth just two down from mine. I meant to read it right away, but of course — school. And then moving. Now I’ve read it, and I’m glad. 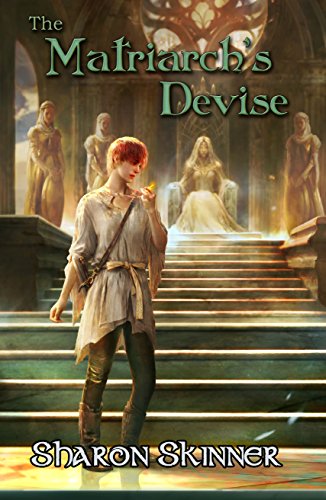 This is the second book I’ve read by Sharon Skinner – this is the sequel to the first book of hers which I read, The Healer’s Legacy – and like the first, this one’s going on the Keep Forever shelf. Maybe partly because Ms. Skinner signed it for me when I bought it from her at the Tucson Festival of Books, but that’s not the main reason: the main reason is that this is a book I needed to read.

In some ways it’s a second book in a series: the characters are already established, and of course I already had my favorites (Those who know me will be entirely unsurprised to hear it is the animals even more than the people, though I like the two main human characters quite a lot, especially Kira), and so I admit to some disappointment when my favorites were not the stars of this book; the animals and Kira are separated fairly early on, and the wyvern Vaith and the hunting cat Kelmir come back into the story later, but never play a major role. The plot picks up at the very second (almost) the last one left off, and after Skinner places the characters where she wants them, the book – ends. Something of a cliffhanger, though it does wrap up the story from this book (and MOST satisfactorily, I have to say), but yes, it leaves you wanting more. Perfectly normal, there’s plenty of development in this novel to satisfy, we’ve seen our people go through a lot; now I have to get the third book, and I have no problem at all with that.

In some ways, though? This is an entirely new story. The twist regarding Kira’s identity – by the end of the book you know who her parents were, what happened to them and to her, and also, how she has the ability to bond with her animal companions – is not something one could possibly see coming, aand the world she is thrown into because of it is fantastic and imaginative and basically entirely unlike the world of the first book. It’s like reading, say, a Tamora Pierce novel, and then the sequel to that suddenly moves the characters into a Rick Riordan novel – like the second book starts with, “Oh, didn’t you know? You’re also an Olympian demigod. Let’s deal with this, now!” Skinner shows a range of writing and world-building that I have not often seen. Let me also say that the change is not jarring: the stories do fit together, and there is more than enough consistency between the worlds and the characters to make it simply fascinating, to watch these characters jump into an entirely new situation.

No spoilers, but: I liked the new world and the people, and the depiction of their magical powers was super cool, especially the defense that keeps their land safe; the villain was extremely villainous, which made it a little frustrating (in a good way) that the villainy kept happening and I wanted to yell, “Why are you not figuring that out?!? IT’S THE BAD PERSON! GO GET THE BAD PERSON!” I was a little bummed that the final conflict sort of borrowed the bad guys from the first book; that did feel slightly out of place – but I loved how the book ended, and as I said, I love the characters and the ways they’ve developed over this book.

I also have to say that I am very pleased that Skinner has written a high fantasy book which not only has a female main character, who is involved with but in no way overshadowed by her romantic interest, but this book also has an absolutely lovely depiction of a long-term lesbian couple done in exactly the right way: like real people in a real relationship, without anything strange or remarkable about their love for each other. The two women are powerful and respected leaders in their country, interesting and sympathetic characters in the story, clearly in love but also with friction between them – it was wonderfully done. This element, though it doesn’t predominate in the story, was another reason why I needed to read this book.

Now I need to read the sequel. I can’t wait.