This morning I am thinking about compromise.

When you compromise, when you meet your opponent halfway so that both of you get something but nobody gets everything, it feels like you — just didn’t win. Probably because humans focus more on our losses than on our gains, but maybe because ‘Merica, often it seems that all we care about is that one little bit, that minor surrender to the other side’s will. “If only I had held out longer or fought harder,” we think, “I could have won it all! I could have gotten everything I wanted!” We got some or even most of what we wanted, after all; the other party was willing to give on some things. It feels so close to victory that it hurts.

But who deserves to win? I want that answer to be me, all the time, but of course that’s not true. I also want it to be the underdog, the little guy, the victim; but it’s hard to tell who’s actually a victim, sometimes. It’s easy to tell who’s the underdog, but I mean, Ted Bundy was an underdog when the State of Florida put him on trial for murder. That’s a case where it was easy to see who the victim was, and it wasn’t Bundy.

I think that the best answer is this: the one who deserves to win is the one who is right. Of course there isn’t always a right side, but if there is, if it’s me, if I actually deserve to win everything I’m asking for, and I can communicate that to the opposition — chances are they’ll let me have everything. Last week Minnesota repealed a law that shielded people guilty of raping their spouse (because marriage implies consent) with a unanimous vote at least partly because one woman brought her case to the public: Jenny Teeson’s husband drugged her and raped her — and filmed it — and then served 45 days in jail for invasion of privacy. The case was so clear, so obvious, that the right side won, completely, without compromise.

When I’m not clearly in the right, when I can’t communicate my rightness to my opponent, then maybe I don’t deserve to win outright. Maybe at that point, I should be willing to compromise. Even if I really don’t want to. Even if I still think I should win everything. There may be some advantage to compromise, then.

When I argue with my students, about an assignment, say, if I can tell them why I want it to be a certain length, and turned in on a certain day, they don’t argue with me.  And not because they respect my authority unquestionably; but because what I say makes sense. Because my assignments don’t have arbitrarily hard requirements, because I always use their assignments as teaching tools, never simply as busy work (Well, almost never), and because I know how to teach my subject, I can show them clearly why an assignment is what it is. My assignments make sense. They can see that it makes sense, and they don’t argue, and they rarely even complain.

The other reason they don’t fight me on assignments is because they recognize that when I am not right about an assignment, I am willing to compromise on it. When I give essays, I ask them how long they think they need to complete it, and when they want it to be due. If they need more time, they can ask me, and I give it. I don’t give length requirements — and I don’t then penalize them for not meeting the imaginary length requirements that were secretly in my head the whole time, which is a common enough thing for teachers to do.

So this is the other side: if there’s not a clear winner based on who’s right, then it has to follow with who’s reasonable. The reasonable side, the side that is more rational and more willing to consider both arguments rationally, is the one who will end up winning: precisely because that is the side that is more likely to compromise. Because really, everything I said about compromise feeling like a loss? Of course that’s only emotion speaking, and pissy, self-centered emotion at that. Reasonably speaking, if I go into an argument and end up agreeing with my opponent that both of us are at least partly right, that has to be considered a victory. Maybe even a better outcome than an absolute victory, because in an argument where my opponent is right and I recognize it, I will learn something, and change and grow. And then afterwards, if I have another argument with the same person, they will be more willing to meet me halfway, to recognize that my side is right at least partly, because I showed that I was willing to give up the things I wanted that maybe weren’t reasonable, or at least were less reasonable than the things the other side wanted.

The problem in this country, at least in politics, is that we stopped wanting to compromise. We decided that we wanted only to be right. Both sides — and it was both sides, regardless of which side you are on and therefore consider to be the right side, the reasonable side, the one that was still willing to work rationally on achieving workable compromises — realized that if they held out, then they could win everything from the side that was willing to compromise; and if their intransigence, their unwillingness to be reasonable and to compromise, led to a collapse of the conversation, which must be rationally considered a loss for both sides because nobody is right and nobody gets anything they want — then they could crow to their fans that they held out, that they stayed strong, and it was the other side who let everyone down because they weren’t willing to accept that MY side, the STRONG side, the side that WOULD FIGHT TO THE DEATH AND NEVER QUIT, was therefore the RIGHT side.

And irrationality wins, and everyone loses.

Compromise is the only way forward, the only way to fix this. We have to get back to a willingness to be reasonable, and a belief in the reasonable will of the other side. We have to be willing to give while we get, always, even with those who are irrational. There are principles one can’t compromise; but that’s not “all of them,” and we have to recognize that the other side also has principles that they can’t compromise, and we can’t simply say “Too bad” and go ahead with our victory dance because we let negotiations collapse.

I know. It kinda hurts me, too. 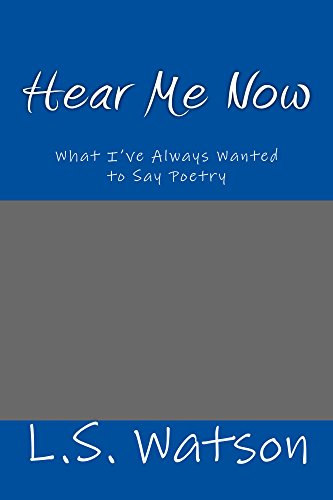 Hear Me Now: This Is What I’ve Always Wanted to Say Poetry

I’ve always been amazed by poetry. (Well, once I started understanding it, that is.) I have no ability to write it, at all. For me, words come in sentences and paragraphs, not lines and stanzas; and what’s worse, they come in enormous torrents: I never use just one word when twenty or fifty will do the same job.

So when I find a poet, like L.S. Watson, who has a remarkable ability to use one word to say many things, I have to just stop and admire. And in that momentary pause, I hear what she says.

I do wish there were more words in one way: this little book, Hear Me Now, is too short. I enjoyed it and I wanted it to keep going. It hooked me right from the start; the first two poems, “Ashes” and “Dancing with Raindrops,” are on facing pages, and show two opposite sides: “Ashes” is about the ugliest side of humanity, our penchant for mindless destruction; and “Dancing with Raindrops” is about the indescribable beauty of short, sudden moments, like bursts of wonder, that come at us sometimes when we’re not expecting them and we need to pay attention, or we miss them. Putting these two against each other heightens the impact of each, as the beauty of nature makes it sadder that men destroy it – but that just means we have to look even harder for the beauty.

The book is like that: I have read it twice, and I expect to read it more, particularly “To Whom It May Concern,” “A Thought,” “The Fight,” and “America, the Free.” There are also several poems about heartbreak that I could not relate to quite as closely, and three that showed me the impact of loss on the poet, “Freddie,” “Mother and Father” and my favorite of these, “Share a Memory.” But my favorite poem in the book is “Imperfections.” I love the message and I love the last two lines especially.

The ending lines are frequently used to maximum impact. Watson’s poems are fairly short, usually one stanza, though that stanza often fills the page and runs over onto the next; the lines are short, often just one or two words. She uses rhyme frequently – which, if there is anything that I didn’t love about this book, it was that; I am less fond of rhyming couplets than Watson – and the short lines and the rhyme force maximum attention onto the specific words used, particularly at the end of the poem, which sometimes – as in “Share a Memory” – falls like a hammer, like a thunderbolt. Or like a dancing raindrop.